This is based on the elm-vegalite package (http://package.elm-lang.org/packages/gicentre/elm-vegalite/latest) by Jo Wood of the giCentre at the City University of London.

Create Vega-Lite visualizations in Haskell. It targets version 4.15 of the Vega-Lite specification. Note that the module does not include a viewer for these visualizations (which are JSON files), but does provide several helper functions, such as toHtmlFile, which create HTML that can be viewed with a browser to display the visualization. Other approaches include automatic display in IHaskell notebooks - with the ihaskell-vega package - or use of external viewers such as Vega View and Vega-Desktop.

It started off being a copy on an early version (2.2.1) of the Elm Vega library, which is released under a BSD3 license by Jo Wood of the giCentre at the City University of London.

This code is released under the BSD3 license.

The Vega-Lite example gallery contain a number of visualizations of the cars.json dataset, which has a number of columns to display, such as "Horsepower", "Miles_per_Gallon", and "Origin". The following code will create a visualization that plots the efficiency of the cars (the "mpg") as a function of its Horsepower, and color-code by the origin of the car:

When the JSON is viewed with a Vega-Lite aware viewer, the resultant plot can be interacted with (e.g. to use the tooltip support) using the interactive version. It can also be viewed as a PNG: 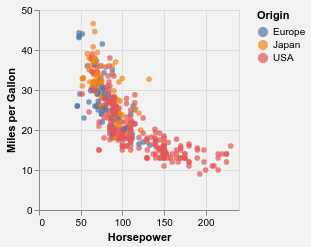 In late 2019 and early 2020 the star Betelgeuse - a member of the constellation Orion - dimmed enough that you could see it. Betelgeuse is a member of the class of Red Supergiant stars, which are massive enough that they will go supernova at some point, and so there was some speculation that we could see a "naked-eye" supernova (even though the current models suggest that Betelgeuse has about 100,000 more years to go before this happens). This interest lead to a lot of observations added to the American Association of Variable Star Observers database, which we are going to look at below. This example is rather-more involved than the case one, since it involves data filtering and creation, multiple plots, faceting, and interactive selection.

This can be viewed as 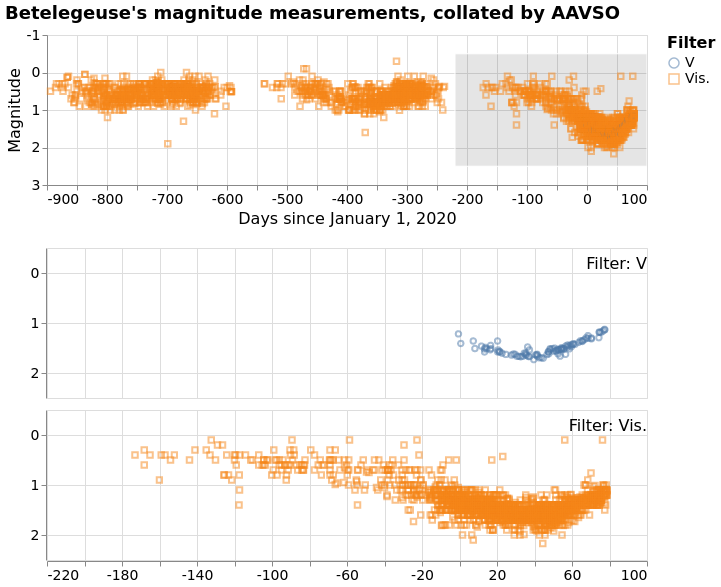 A tutorial is provided as part of the module: it is based, as is so much of the module, on the Elm Vega walk through. The tutorial is available on hackage - and includes the plot outputs - and the plots it creates are also available by importing the Graphics.Vega.Tutorials.VegaLite module.

The Vega-Lite Example Gallery has been converted to IHaskell notebooks in the notebooks directory. Start with the overview notebook, which describes the set up, and then the individual sections have their own notebooks (with names of VegaLiteGallery-<section>.ipynb.

It is strongly advised that you stick with jupyter notebook rather than jupyter lab, since the 0.3 release of ihaskell-hvega provides much better support for the former than the latter.

The notebooks have been created using Jupyter Lab (thanks to Tweag I/O's JupyterWith environment).

Elm Vega has changed significantly since I started hvega, and no-longer exposes data types directly but uses functions instead: for example, rather than PName, it uses a function like pName. It is an open question whether hvega will make the same switch. Over time the naming of certain operations or data types has diverged between hevga and Elm Vega.

One of the more-obvious changes is that the output of toVegaLite is a separate type from the input values - that is VegaLite and VLSpec - since it makes it easier to display the output of hvega in IHaskell. The JSON specification is retrieved from this type with fromVL. The 0.5.0.0 release adds some more type safety (restricting the functions that can be applied to encoding and transform for instance).