Warning: This project is still under heavy development and you are recommended to use the Git repo rather than a packaged release.

To give a flavour, the web GUI looks of a running Bake system looks like: 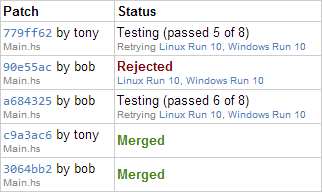 Acknowledgements: The name "Bake" is thanks to Andy Adams-Moran.

Bake is a Haskell library that can be used to put together a continuous integration server. To run Bake you start a single server for your project, which coordinates tasks, provides an HTTP API for submitting new patches, and a web-based GUI for viewing the progress of your patches. You also run some Bake clients which run the tests on behalf of the server. While Bake is written in Haskell, most of the tests are expected to just call some system command.

There are a few aspects that make Bake different from most alternatives:

Bake is highly parametrisable, and can be reconfigured to support several different styles of use, but here I give one plausible workflow. Imagine a number of developers, somewhere between 5 and 50. Each developer has 1 or 2 active branches they are working on. You have a master branch, which developers merge from once a day. When a developer has completed something they push their branch to the Git repo and register the SHA1 with Bake. Bake then tests the patch on all tests (in conjunction with all other patches that got promoted) and if it passes merges it into the master branch. Once a day (say 7pm) you pause the incoming patches, ensure the queue has emptied, then resume.

The test suite provides both an example configuration and commands to drive it. Here we annotate a slightly simplified version of the example, for lists of imports see the original code.

First we define an enumeration for where we want tests to run. Our server is going to require tests on both Windows and Linux before a patch is accepted.

Next we define the test type. A test is something that must pass before a patch is accepted.

Our type is named Action. We have two distinct types of tests, compiling the code, and running the result with a particular argument. Now we need to supply some information about the tests:

We have to declare allTests, then list of all tests that must pass, and execute, which gives information about a test. Note that the test type is (Platform,Action), so a test is a platform (where to run the test) and an Action (what to run). The run function gives an IO action to run, and require specifies dependencies. We use an auxiliary matchOS to detect whether a test is running on the right platform:

We use the suitable function to declare whether a test can run on a particular client. Finally, we define the main function:

We define main = bake, then fill in some configuration. We first declare we are working with Git, and give a repo name and branch name. Next we declare what the tests are, passing the information about the tests. Finally we give a host/port for the server, which we can visit in a web browser or access via the HTTP API.

Now we have defined the example, we need to start up some servers and clients using the command line for our tool. Assuming we compiled as bake, we can write bake server and bake client (we'll need to launch at least one client per OS). We can view the state by visiting http://127.0.0.1:5000 in a web browser.

When viewing the server, there are a few additional URL's that may be of use: